Florian Fritsch, Christopher Catrambone and Hans Schiebel in May 2015 in front of the MOAS rescue ship Phoenix

Malta – “The people shout for help. They desperately try to attract attention. Most of them are completely exhausted,” says Regina Catrambone. Only last year, she and her husband Christopher saved the lives of 3000 people on the high seas with their refugee rescue ship “Phoenix”.
As soon as they discover one of the completely overcrowded smuggling boats, the dinghy with life vests is let down into the water. “Because the people sit in the boat for days, jammed together with bent legs, they get severe cramps as soon as they want to walk again. That’s why we first have to carry many of them onto the rescue ship deck.” 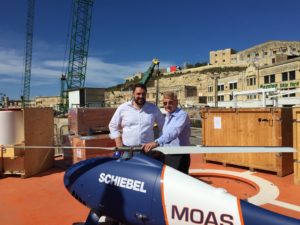 On the “Phoenix”, they are given water and dry and clean clothes. “Most of them are mentally and physically at the end of their wits,” says Regina Catrambone in the interview with BILD. The people are medically treated on board, their temperature is taken, they receive medicine and blankets. “It’s cold at sea during the night and many have soaking wet clothes.” 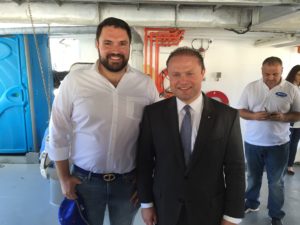 “Just in the last six months we have collected half a million euros for the rescue mission,” says Florian Fritsch, paramedic and MOAS-fundraiser in May 2015
During a boat tour in the Mediterranean Sea in 2013, the cofounder of MOAS felt that she urgently needed to so something against the mass mortality in the Mediterranean Sea.

She saw a jacket floating in the water. “Why is it floating here,” she asked the captain at that time. “It must have belonged to someone who didn’t make it” – this was the moment when Regina and her husband decided to do something against it. “We had to do something. Those are humans just like us. They are fleeing war, starvation and persecution. We need to help them.”

Regina and Christopher Catrambone founded MOAS (Migrant Offshore Aid Station), the rescue mission for refugees in the Mediterranean Sea. They invested almost two million euros in the ship and the necessary equipment: Renovation and upgrading, dinghies, life wests and besides the important technology for the rescue mission also two drones to find people floating in the sea.

The couple wants to continue saving lives at open sea. This is why the Catrambones are grateful for any donation. “Just in the last six months we have collected half a million euros for the rescue mission,” says Florian-Benjamin Fritsch, paramedic and MOAS fundraiser.

“The dramas will go on lasting as long as a solution is finally found,” says Regina. Until then, she and her MOAS-team will continue saving lives in the Mediterranean Sea.